a few books I like a lot, sometimes with a little review...

A novel on how sea life suddenly turns against man. A fishermen on a small boats disappears in South America, orcas attack whale watchers on the shore of Vancouver Island. Plagues of poisonous jellyfish appear at beaches in Australia, and strange worms drilling into the frozen methan layers are detected in the North Sea. Scientists first look for answers locally, independently. Ships disappear without a trace. As more and more incidents happen, they start to talk. The US government sets up a think tank collecting the best researchers, and slowly they become aware that all forms of sea life seems to be triggered by an unknown life form to fight man. An unknown sort of glibber is detected in the brains of aggressive whales and poisonous crabs

Meanwhile, the methan shields in the North Sea collapse in scales and cause a giant tsunami on the Scandinavian shores...

How to communicate with such a life form? Is it intelligent? Will it reason? Schätzing has his protagonists raise some really interesting philosophical questions on mans attitude towards life and intelligence and finishes the book with a showdown between military and science and a cease fire between the swarm and man. Fantastic book!

A entertaining, stunning novel about a drop-out place in America. Hippies and wanna-bees, and their more or less chaotic attempt to drop out of a society they don't like. Smoking, talking wierd stuff. Flat stuff, basically. Wierd freeloaders arround them, of corse. And no possibility to get rid of them due to the "Love and Peace and a Place for Everyone" rule. After a while, the whole bunch is forced to leave the farm they are dwelling, and with an old school bus and two or three cars they'd head off for a farm in Alaska. They reach the place, yet have no clue how to survive. In the village, there are trappers and farmers with their own livestyle and their own rivalities, upon which some of the newcomers split up...

The way the novell is written gives the reader the impression Boyle must have been living such a livestyle. Everything sounds authentic, lively.

A journey into the traditional Japan, the time of the great Samurai warriors... The main character is a historic figure who existed & whom many places in Japan are related too.
This book is about a boy who went out to become a Samurai, his long way to achieve his golden goal and of course the problems & fights he had to stand. It is the story about his friend Matahachi too, who wanted to become a Samurai too but did not quite had the resistance to withstand his own desires. And it is the story of a deep love, unsatisfied over a long period. So, this book is full of action, philosophy and romance. Hmm, I read this just before going to Japan. Or was this book a reason more to go?

"The world is always fullfilled by the noise of the waves. The small fish who left themselfes handed over to the waves, they play and dance. But how knows the soul of the sea, hundred feet deep. Who knows its depth?" 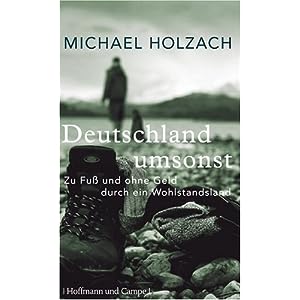 A young journalist packs his backpack, says farewell to his girl and gets himself a dog from the neighboring pet asylum, then walks off Hamburg on his feet. He's commited to walk the country, from North to South, and god only knows when he's going to return. He is further commited to do it without money nor credit cards, just begging for some food for the dog and a place to sleep in the farmers barns. As a temporary Drop out and experienced journalist, he keeps his diary and fills in all those tiny details of such voyage - the friendly as well the unfriendly encounters, the happy walks in the sun as well as the mood swings after a few days walking in the pouring rain. And he's doing well in writing, every page is a joy to the reader. Somehow, this book recalled a lot of my own experiences on the road. Now I know, there is this "Japanese type" of travelling - tabi - in Germany too. And that there is a German saying for "Once on the road, always on the road", too.

For the English speakers - sorry, it is available in German only.

Back in the days of the Roman empire: A beautiful story about a girl being raised by a healing woman that rescued her after her birth from the Roman soldiers. The old woman does not know about young Selenas fate, yet she has the key, some amulett given to her from Selenas father. By the age of 16 years, the girl fells in love for a Roman doctor called Andreas and gives him the amulett as present without knowing anything about the meaning. Fate mades her dying healing mother bringing her to her birth place to discover the secret of the amulet, yet the old woman doesn't know Selena gave it away. The caravan gets attacked, the old woman dies and young Selena gets imprisoned by the personal physician of some royal couple. After months, she manages to break free with a German who does not speak her language, and they run away into the wide dessert. A long journey through various countries of the Middle East, and a long way looking for her beloved Roman doctor. Healing people, learning from other healers and eventually crossing Andreas path again. Fate reveals her true origin, yet the journey is by far not over yet...

books from the road, and for the road

anything from Science, Esoteric, Trance

a few of my favorite books, sometimes with a little review...